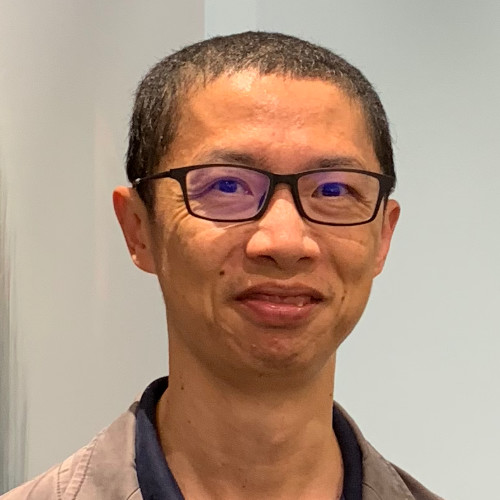 In training classes and workshops about blockchain framework (or platform) and application development, I always encounter questions showing that some concepts are mingled together. Question like “do I need an Ethereum mining node in order to get my ERC20 tokens” reminds me that we need a better way to understand blockchain frameworks.

Infrastructure, or sometimes it can be called network, is composed of the nodes and the software running on them. The nodes can be physical machines, virtual machines or containers. Software is the most soul, providing features and capability such as users (identity or accounts), transaction formation and processing, consensus protocol, and something unique to specific frameworks, like native currency and mining for permissionless blockchains, channel and identity management for permissioned blockchains, etc.

With these, let’s examine these two most popular blockchain frameworks.

These are the most popular blockchain frameworks currently. Ethereum is more a public blockchain, running for several years, and people keep developing application on this public blockchain. Hyperledger Fabric is an enterprise blockchain platform, enabling consortium application across business entities. At this point they are different.

Nevertheless, there are some common points that both are sharing as blockchain frameworks. Here I try to do a quick table for them. 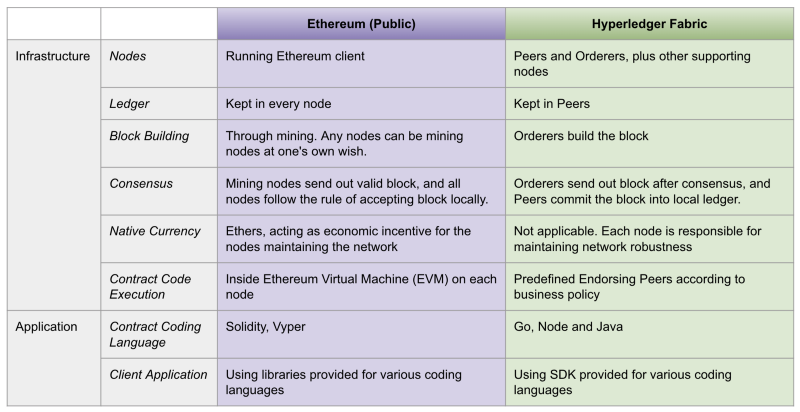 As a public and permissionless blockchain, the Ethereum Mainnet is already up and running for years. It is a network of thousands of nodes, where the real ethers are used, and many miners are competing one another to maintain the robustness of network with economic incentive. Node can join and leave the Mainnet at any time.

Therefore in many cases we do not worry too much on the infrastructure, sometimes take it for granted that “it is working”. We keep developing new types of application on top of this robust and decentralized infrastructure. This is in the application portion of Ethereum network.

There are several live public Testnets, of real nodes running the software somewhere. As the name indicates, they are for application testing before being deployed on Mainnet. Testing ethers are used in Testnets. Currently we have Ropsten, Kovan and Rinkeby as the Testnets.

There are some good tools for Ethereum application development. Remix (Link) is an online IDE for Solidity contract development and deployment, and Truffle Framework (Link) provides additional testing capability and supports client application development as well. These tools come with Ethereum Simulators. An Ethereum Simulator gives you something like a real Ethereum network with user accounts and testing ethers. However it is just a process inside your localhost. They are good tools when you begin with Solidity contract coding. With them, we are good moving to the Application portion. 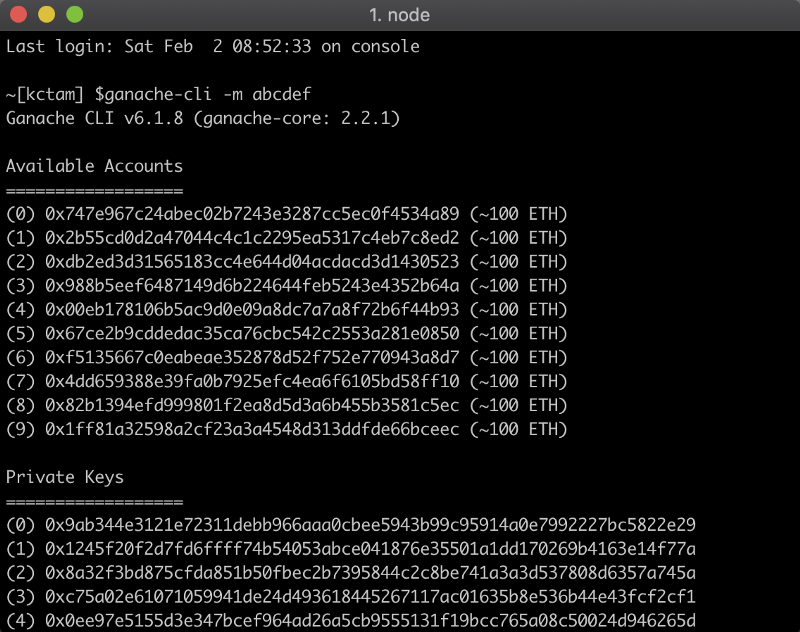 Ganache (from Truffle) is an Ethereum simulator with accounts and ethers

Ethereum application is always known as Decentralized Application (DApp) as the contract code is executed across the network in a decentralized way.

Currently the de-facto contract coding language is Solidity, although it is not the only one when this idea was born. A new coding language Vyper is also coming, claiming better security and auditability than Solidity.

The contract code after compilation is running inside the Ethereum nodes (in Ethereum Virtual Machine, EVM), and the result of contract code execution is to update the world state and/or any contract state.

Ethereum network comes with JSON RPC, a light-weight remote procedure call protocol, acting as the interface for external world. Besides directly calling, there are libraries for different programming languages and frameworks. For JavaScript it is the web3.js. With web3.js, client application written in JavaScript can perform any Ethereum operations including deployed contract code.

As mentioned above, a good framework guarantees that, the application developed on one Ethereum network should work fine in another. Tools like Remix and Truffle allow you to select which Ethereum network to deploy your contract code. For example, you always begin with coding on the Simulator, and after that moving it to one of the Testnets and finally Mainnet for application deployment. During this process you do not need to customize your contract code.

Here is an example of an ERC20 Token Contract. The same contract works across these Ethereum networks. 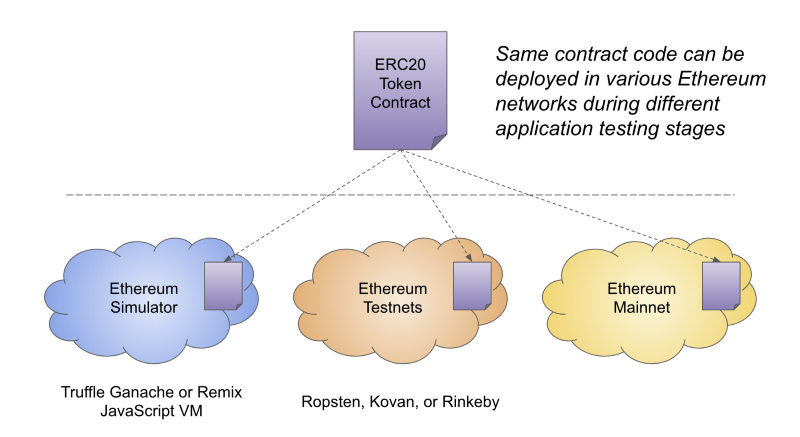 A network can be as simple as a single peer and a single orderer, or complicated when it involves many organizations. As there is no public network that you can directly use, we need to have a network before we test our an application.

The network deployment involves the proper generation of signing key and certification for identity, initial configuration transaction for channel setup, docker containers as nodes of different roles, correct matching of certificates to the nodes and users, etc. Fabric-Samples from Hyperledger Fabric comes with tools and container images for bringing up networks.

Once the infrastructure is ready, and we can deploy the application on it.

As mentioned above, a good blockchain framework should allow application development independent from the infrastructure. Therefore when we develop and test our chaincode, we can run a minimum setup of Hyperledger Fabric network so that we can focus only on the chaincode and client application, ignoring most complicated part in the infrastructure. So far I found the Basic-Network inside the Fabric-Samples are good enough. It comes with one CA, one Orderer and one Peer. It also provides CLI such that we can interact the network for testing. After chaincode and client application work in the basic setup, we can move it to another infrastructure to simulate a more real life use cases (e.g. multiple organizations and multiple peers)

For example, the Simple Asset Chaincode (sacc) in Fabric-Samples can run on Basic-Network, and can also run on the First-Network (also in Fabric-Samples), in which total four Peers are defined in two organizations, which more complicated endorsing policy.

Here is how the same chaincode can be deployed in various Hyperledger Fabric networks. 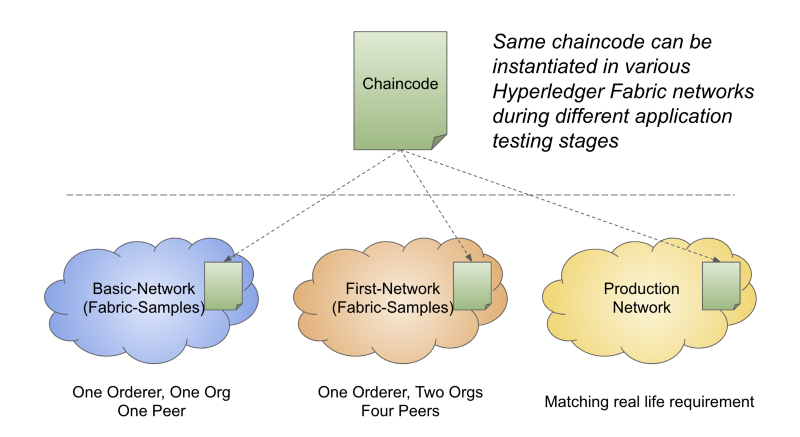 In this small article I try to use a way to better understand blockchain frameworks, by dividing them into the infrastructure and application portion. Each portion has its own design, and application development should be independent on how the infrastructure is evolving. We have some further exploration on both Ethereum and Hyperledger Fabric frameworks, and see how this division helps understand what is what and where.

Hope you find this article helpful. Don’t forget to give some claps.

K.C. is a passionate teacher and consultant for blockchain. As a Certified Expert, he deep-dives into various platforms and evaluates their use. His background in cloud architecture supports him in his daily work with blockchain frameworks.